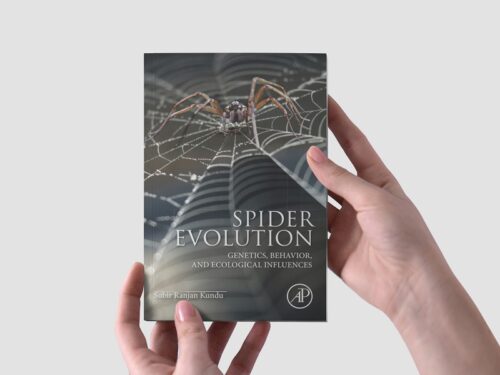 The book, titled “Spider Evolution: Genetics, Behavior and Ecological Influences”, has been published on 19th October 2021 by Academic Press Inc., / Elsevier, New York, USA. At the same time, I would like to take the opportunity to say a few words about the content of this literature.
My book, entitled “Spider Evolution: Genetics, Behavior and Ecological Influences”, belongs to the genre of non-fiction narrative and delves into popular science consumable for all keen masses with a thirst for understanding scientific concepts in a simplified manner. The work centers around my conjectured proposition of the shift in the paradigm of the major evolutionary developmental transitions of the living organisms in the backdrop of a diverse array of ideas to match with a distinct set of evidence. It begins with the understanding of the processes of evolution of fitness, occupied the epicenter of principles of biological evolution. Whether its natural occurrence or experimental coordination, evolutionary fitness is a cardinal instance of evolutionary links of biological organisms that led the derived state of the organism to get closer to its contemporary derived state after being drifted away from its ancestral state. Eventually, evolutionary fitness depends upon the efficient and flexible role of adaptation synced its diversified state of an organism by responding through behavioral and structural changes, regulated by dynamic gene actions at the molecular level to cope with changing environment, the organisms belonged to. Strategically, the act of major transitional form of changes (in terms of structural/functional), left behind the evolutionary footprints of a distinct group of a biological organism (ranges from a simple and unicellular prokaryote to an advanced group of multicellular eukaryotes) have gone through changes to be evolved and re-evolved in unique shape, structure and functional entity to sustain in the survival race of the universal evolution of fitness. The entire evolutionary journey of adaptation has been more or less triggered by dynamic environmental conditions and controlled by genetic changes at the molecular level.

“Spider Evolution: Genetics, Behavior, and Ecological Influences” is an earnest and inclusive endeavor to narrate the journey of biological evolution in general with a special effort to traverse through the evolutionary trail of arachnids, particularly the spiders to narrate its prehistoric origin, the evolutionary shift in paradigms it traverses through to cope with the Spatio-temporal dynamics of life to achieve sustainability. And this unique story of introspection of evolution’s major transitional links in the biological world specifically related to the origin and evolution of members, belonging to Arachnida has been started with paleontologist’s exploration of extinct organisms and ended with the critical reviews with developmental biological revelations and witnessing phylogenomic and molecular footprints of the diversified extent, contemporary spiders to catch the glimpse of evolutionary changes diversification initiated since its origin around 400 million years ago and ends with the emergence of behaviorally aggressive spiders, sustaining the cascading exposure of tropical storms in the contemporary climate change regime in Anthropocene on Earth. Since 1853, Charles Darwin’s, “Origin of Species employing Natural Selection” has stumbled some times in its course of elucidation of a journey of evolution of life on Earth, due to lack of evidence of transitional forms (either in extinct or extant form), connecting between two or more leading group of organisms. The lack of paleontological evidence till the 1970s and little advancement in the field of developmental biology, molecular genetics, and phylogenomics till the 1990s hold the scientists to elucidate the evolutionary progress of life on Earth with certainty.

Other items listed by bookpromotion